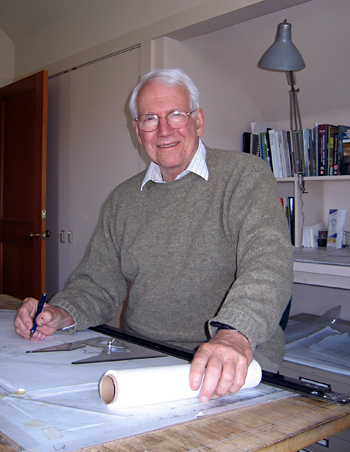 John Milnes Baker is an award-winning architect who specializes in Residential Design – New Homes, Alterations and Additions, and Historic Preservation. He was a 2018 recipient of Marquis Who’s Who Albert Nelson Marquis Lifetime Achievement Award as a “leader in the field of architecture.” The Connecticut Chapter of the AIA and the Fairfield Museum and History Center co-sponsored PART I of Mr. Baker’s two-part program on The History of the American House on April 2, 2019. It was accredited by the AIA in Washington for CEUs (Continuing Education Units).

His work has appeared in numerous architectural journals and three of his designs were among Better Homes & Gardens’ HOME PLAN IDEAS’ “Top Ten All-Time Favorites.” One of these houses, “an elegantly simple contemporary salt-box,” was featured as “their Readers’ All-Time Favorite.”

A fine-arts graduate of Middlebury College, Mr. Baker earned a masters degree in architecture from Columbia University. A member of the American Institute of Architects, he is registered with the National Council of Architectural Registration Boards in Washington DC and is licensed in several states. Mr. Baker is also a member of the Society of Architectural Historians and the National Trust for Historic Preservation. He served for over twenty years as an arbitrator with the American Arbitration Association. A long-time member of the Katonah Historic District Advisory Commission when he lived in Bedford NY he also served on the Bedford Historic Building Preservation Commission. After moving to South Kent CT in 2005, he was asked to stay on the preservation commission as a paid consultant. A former member of Kent Affordable Housing, Mr. Baker also served on the Kent Architectural Review Board for several years from its inception.

Mr. Baker is married and has four grown children. He sails, hikes, skis and “in his other life” sings ballads and folksongs.

" 'Brains first and then Hard Work…that’s the way to build a house,' said Eeyore."
-- A.A. Milne, The House at Pooh Corner